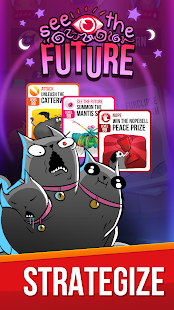 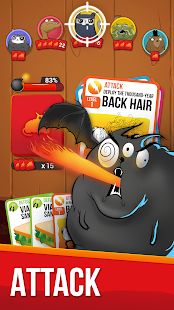 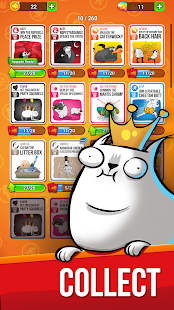 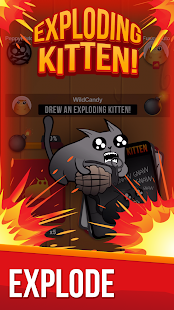 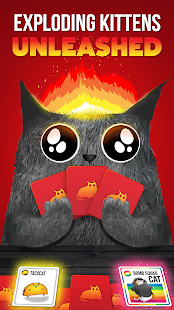 Exploding Kittens, the #1 game in Kickstarter history, is back with an all new incendiary feline experience on your mobile device.

'It's like UNO, except there are goats, magical enchiladas and kittens that can kill you.' - CNN

In this highly-strategic, kitty-powered version of Russian Roulette, players draw cards until someone draws an Exploding Kitten, at which point they explode, they are dead, and they are out of t​he game -- unless that player has a Defuse card, which can defuse the Kitten using things like laser pointers, belly rubs, and catnip sandwiches. All of the other cards in the deck are used to move, mitigate, or avoid the Exploding Kittens.

KEY FEATURES:
- 2 - 5 players with online tournaments.
- All of the cards from the original game are here plus and some brand new weird stuff.
- NOPE CARDS! Your favorite cards from the physical game make their debut in the digital world. Use the power of the interwebz to ruin your opponent’s strategies and imagine their remote misery!

Skip: Immediately end your turn without drawing a card
Attack: End your turn and make a player take any other turns you have left plus two more
Defuse: Defuses an Exploding Kitten instead of exploding
Favor: Force another player to give you one card of their choice
See the Future: Peek at the top 3 cards of the Draw Pile
Shuffle: Shuffles the Draw Pile
Nope: Stop any action except for an Exploding Kitten or a Defuse card.
Cat Cards: Play as a pair to steal a random card from another player, or as a three-of-a-kind to name a card they have to give you.

Kickboxing - Fitness and Self Defense 1.2.2